...for your special project

Back in the Saddle...

It has been a LONG time since I've posted here - and much has changed.  My kids are older, we've moved across the country, I'm back to being a stay-at-home (now homeschooling!) mom, and I find myself with time to spin again.  Oh, how I have missed it!  There's just something soothing about sitting at my wheel, taking fiber, and transforming it into yarn that can be knit into useful things.

I no longer have a storefront website - but I'm planning to update this blog and the Handspun by SweetKnits Facebook page.  I'm also hoping to make some handspun yarn available at local craft fairs.  I'm pretty excited!

If you see something you like, please let me know - or if you are in the market for some custom spinning, please keep me in mind. :)

Currently on the wheel:  "Black Coffee" in a merino/nylon blend from Fiber Optic Yarns. :) 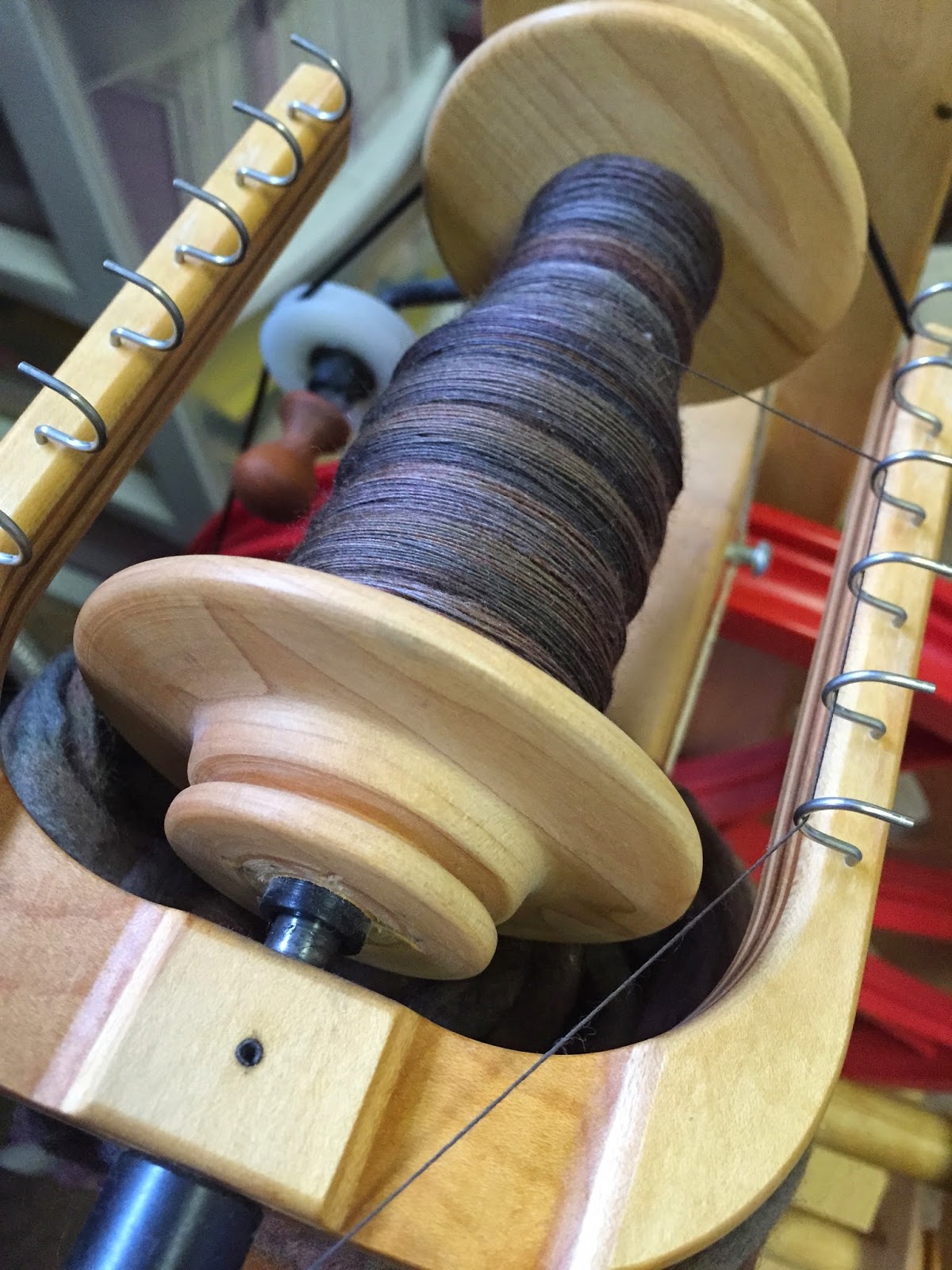 A sweet surprise! (and for sale!)

So, I went up to the MA Sheep and Woolcraft Fair again this year. I decided to be adventurous, and took with me five of my 4th and 5th grade students. We had a blast! The kids got to do cool things like learn to spin on a drop spindle (how many 4th/5th grade teachers can say that 3 of their boy students chose to forgo video games to learn how to SPIN?), kool-aid dye, and make a felted treasure bag with some wool roving, a rock, and some soapy water (and a lot of time squeezing and rubbing). We walked around and looked at the animals. We watched some of the sheep dog trials. It was such a nice time - away from technology, and outside in the fresh air sharing all things fibery with my students.

I entered some things in the exhibit again, too. A wool shawl that I knit for my Mom didn't place, but did get a really nice comment: "Nice job! Lost out to things knit with handspun yarn."

But this made my weekend: 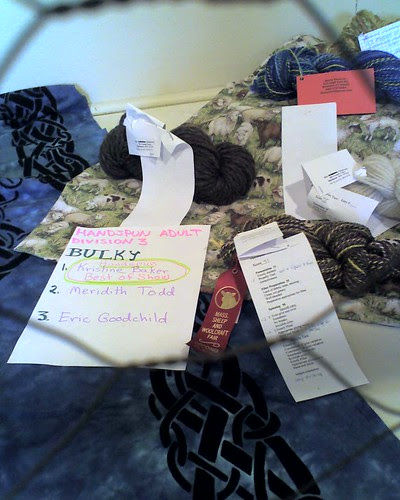 Second place in the bulky division for handspun! Considering that I almost didn't even bring that skein, I was STOKED!

And now, that very skein of yarn is stocked at SweetKnits! You can see the listing here: Yummy handspun that won 2nd place - you really want to bring this to your home! 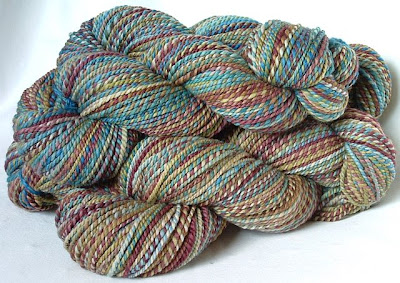 Indulge Your Needles Handspun Club
Posted by Meri at 9:48 AM No comments:

Want to see something pretty? 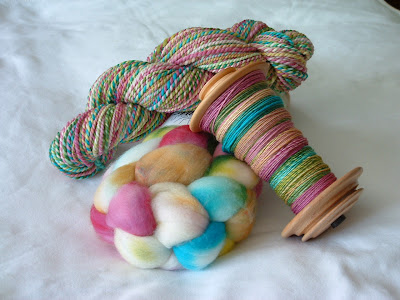 Zenstring's "Bloom" on superwash merino. I'm in the middle of 24oz of this wonderful stuff, and loving every minute of it!
Posted by Meri at 10:40 PM 1 comment: 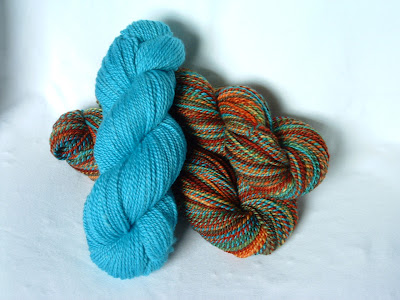 Of Frogs and Ladybugs

You know the story, right? Where the Princess has to kiss a frog to find the Prince? Did you have to do that - get past a few toads to find your prince? I'd recount my rollercoaster ride that led to my Prince, but some stories are best told in person.

However, there is another fairytale I can share with you - because, sometimes you have to "kiss a few frogs" in your spinning journey, too. Allow me to tell you my story...

Long ago and far away... (this is a fairytale, afterall) there lived a young maiden who loved yarn. She decided that her love of yarn was leading her in the direction of spinning her own (it is only natural, right?), and off to the yarn shop she went - to find the tools she would need. Her first tools were simple: 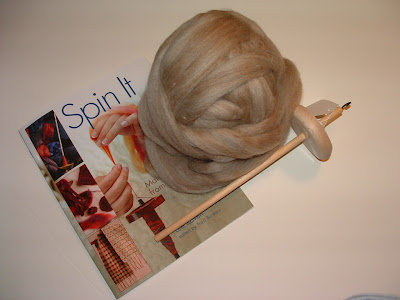 A drop spindle, a book, some domestic wool. But home she went with her treasures. She tried and tried to spin something that remotely resembled yarn. The spindle was difficult for her to master. In frustration, she returned to the yarn shop for help - and was met by a most kind lady who taught her how to work with the wool and spindle. This wonderful lady even sat her down behind a wheel - though that did not go well - the maiden felt clumsy and uncoordinated. Back home she went, with her spindle in hand, determined to practice.

But soon, she knew that she needed more than a spindle to create the yarn of her dreams. She longed for a wheel. But the cost - it was so much. She waited, and saved - talked with her husband - and planned. Finally, after four months, she was able to get a wheel - a beautiful spinning wheel right out of a storybook! Her name was Aurora Rose - "Rory": 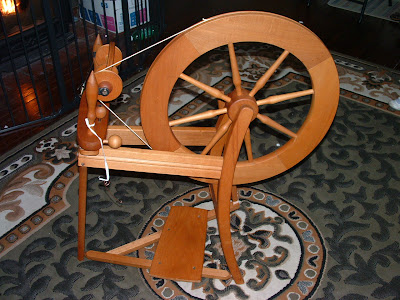 For a few weeks, she struggled to teach herself to use the wheel. She practiced and practiced - spun and spun - worked and worked - until it clicked. The movements and motions started to come more naturally - she could sit at her wheel and spin a bobbin of yarn, then another, then ply them! She was making yarn!

But her skeins were small. The bobbins on her lovely wheel held only so much. She purchased a larger bobbin and flyer kit - and struggled and struggled, but could not get it to work properly. She was frustrated with her limitations on her wheel. A more experienced spinner could no doubt have worked through the issues, but she was still so new. She decided to sell her beautiful first wheel and buy something else. Something that would allow her to hone her skills even more. She debated and calculated - between the wheel she'd sat before in her spindle days, or another... 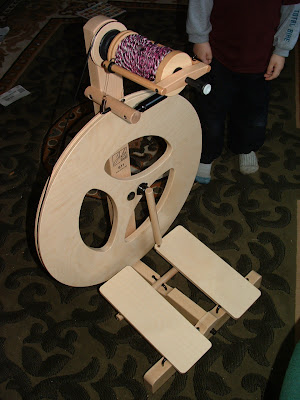 Oh rapture! Lovely in a different way - larger bobbins that would allow her to spin an entire 4oz skein at once! They bonded immediately and off they went on a glorious spinning journey. They spun merino, BFL, alpaca, silk... they spun thick yarn and thin yarn. They traveled to guild meetings and spinning nights.

And then came Christmas - the maiden and her family packed up for a two week visit with family across the country. The wheel had to stay behind. A week into her stay, the maiden could take it no more, and searched for a nearby store that rented out spinning wheels. She found one - but the wheel was a different one. It was the same type of wheel that she had sat in front of over a year ago in her own yarn shop - struggling with movements and coordination. The same wheel she'd rejected when choosing Julia-Morgan. But it was different now. She sat at the wheel and something magical happened - a connection was there. Spinning was effortless and smooth. She didn't want to stop. When she arrived home, she missed the wheel. Her own wheel paled in comparison. The connection just wasn't there. She was in love - but with another wheel!

She agonized for days. She listed pros and cons - she planned and calculated. And she made the decision - she would sell Julia-Morgan. The wheel needed to be in a home where she held the spinner's full affection. Several weeks later, she packed the wheel lovingly into her car, and drove her to her new owner. She returned to a wheel-less house... she waited nine days. Nine grueling days. Until... 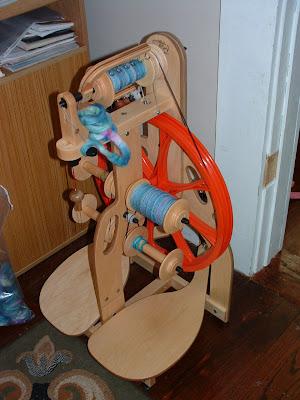 Her Katie-bug arrived. This was it - this was HER wheel. It was not lost on her that she'd been introduced to this wheel before, and totally failed to see that it was indeed her "prince." She had taken the scenic route, but had arrived at her destination at last.

I was blessed to do a trade with Ryann of Woolen Wishes for Baby - my daughter got a fabulous knit skirty/shirt combo, and I was going to do some custom spinning. Ryann chose her fiber, and I ordered it - all the while thinking that I wasn't going to love spinning it. It just wasn't a colorway that I'd have chosen. I didn't hate it - but just wasn't overly drawn to it.

Then the fiber arrived - and I caught my breath. It was beautiful! Three Irish Girls "Cole": 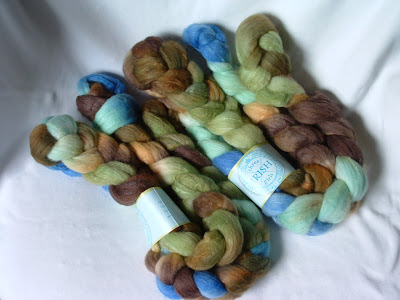 How could I have ever thought I wouldn't love this? I love blue. I love green. I love brown. There is no part of this colorway that I don't like individually. And together? Stunningly beautiful.

And then I spun it up. The fiber was a dream to spin (80/20 Merino/Silk) - soft, a touch of sheen, and drafted with ease. I fell in love with the colors again as they slipped through my fingers onto my wheel. How could I have not ordered extra of this fiber for myself? And when I plied it - the colors danced together in a way that only handspun can... combining into a stunning yarn that I dreaded packing up and sending away. 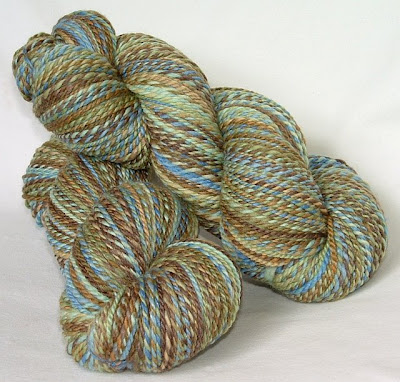 Thank you, Ryann - for a wonderful trade, for a glorious spinning experience, and for causing me to have yet another love affair that is no doubt going to cost me some money down the road.
Posted by Meri at 12:56 PM No comments: